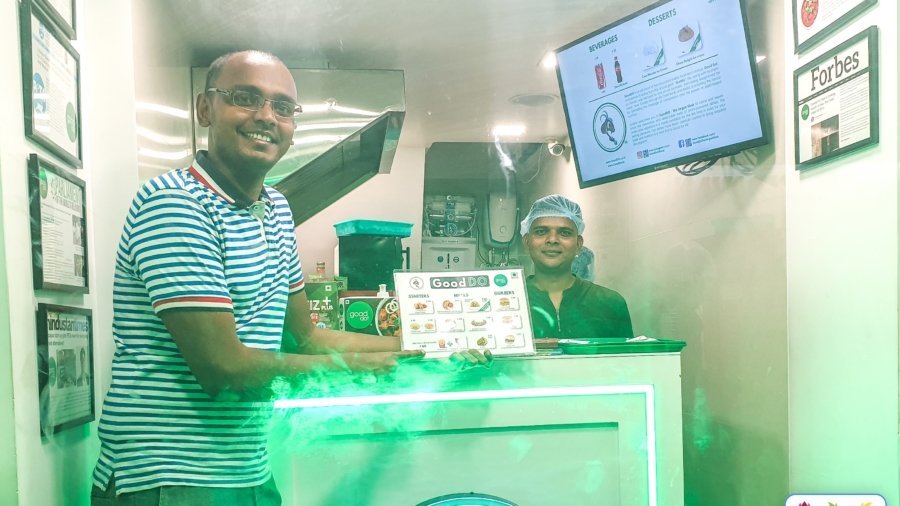 by Harsha Atmakuri with No Comment Truth Is Vegan

For those who don’t know, GoodDO – The Vegan Kiosk is India’s first 100% vegan fast-food chain outlet. Last night (11Oct2019), I got the chance to go and eat at one of their outlets located in Mumbai – just 3 minutes walk from The Gateway of India, behind the iconic Taj Hotel.

I just went in with an open mind, neither expecting anything good nor bad. But once I entered in, looked at the menu and tasted the food – I was blown-away! Food was just amazing!!!

Lo and behold! GoodDot has fulfilled both the criteria and has proved that vegan food can taste as good or even better than non-vegan food and at the same time remain affordable as well.

The prices are very much affordable and highly competitive and cheaper than non-vegan counterparts. Food is delicious and tastes like real meat and dairy.

Now you might ask “Why to make food taste like meat or dairy?“
The reason is simple – most people to whom I (or anyone who) advocate animal rights, will often get asked: “But I cannot live without the taste of meat; I can quit animal products except cheese; etc. etc.” Hence to make the vegan transition easier for them, these vegan alternatives are very much helpful in alleviating animal suffering and encouraging others to go vegan.

The Fried Crispies Gurber (burger) that I had tasted exactly like the chicken burger I used to eat 10 years ago. Then I had Fried Crispies and Desi Curry Bowl all taste very good and it’s cruelty-free.

I personally neither crave nor desire for meat, however, I will definitely support a company that helps in saving animals through serving vegan food.

In their own words, they say:
“The mission of GoodDO is to serve delicious, cruelty-free food.”

IN CONCLUSION:
Go, enjoy the cruelty-free food that is both delicious and priced very reasonably; and take your friends and family with you. You will not regret.

PS: The good news is GoodDo is soon launching vegan ice-creams in their menu along with expanding their franchise to other parts of Mumbai and India.

As of now, GoodDo is located only in Mumbai, Jaipur and Udaipur. You can locate their stores here

I wish the GoodDo team success and all the best!

by Harsha Atmakuri with No Comment Truth Is Vegan

“Why ‘Truth Is Vegan‘? You should’ve started with your own name in it, something like ‘Harsha Activist’ or ‘Vegan Harsha’ or just my name ‘Harsha Atmakuri’ “ said a few activists and friends when I first started Truth Is Vegan.

TIV is named with the realisation that – anyone who seeks Truth will inevitably come to the conclusion that they must go vegan. Hence TRUTH IS VEGAN.

My answer was: “For me, the message is more important than myself. I can do work from behind without the need to be present on the screen unless it’s necessary.” However, it came with a mild setback – people (including many activists) thought and still think TIV is an organisation run by a group of people. Nevertheless, that’s how the perception goes and I never bothered about it.

This 21Sep I complete 1 year of “Truth Is Vegan.” When I first started TIV, I was aimless about what to do and where to start. I began with a video explaining why – Truth Is Vegan, followed by several interview videos of various vegan celebrities in India, personal activism and self-designed posters that depict SPECIESISM, ANIMAL RIGHTS and COMPASSION in various forms, etc.

In Feb 2019, I started a new branch under TIV – a photoblog for vegans called “Vegans Of India (VOI).” Inspired from pages like Humans Of New York, the intention is to capture and share the stories of various vegans from all walks of life – so that people can make the instant connection to the vegan community, aiding in understanding animal rights along with inspiring them to go vegan.

This was a unique initiative and it is a success. The unique thing is that it showed vegans under a different light – not the stereotypical angry person but a kind, caring person who is doing some good for the wellbeing of animals, the world and also to humans.

So far I’ve made about 26 videos under TIV, 52 interviews on VOI, about 80 posters, written a few articles, etc. which were shared on social media (Whatsapp, facebook, twitter, etc.) presented in college lectures and seminars, etc – viewed and/or read by millions of people both in India and around the world. Thus aiding in spreading the message of Animal Rights / Veganism in whatever little way possible.

Having said that, whatever I accomplished so far, it is inspired by great men like Tolstoy and many other dedicated vegan activists and animal rescuers in India and around the world. I must confess that I couldn’t accomplish whatever I did so far, without the help of a few activists who selflessly supported me in my journey.

More work ahead, more videos to come, more posters and inspiring stories to be shared, and much more. Working alone has its own challenges and also rewards. Hoping for a stronger year and collaborative work.

Thank you for reading and your support. 🙏